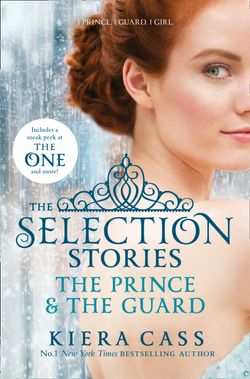 It’s swoon meets the Hunger Games in THE SELECTION series!

Two captivating Selection stories – ‘The Prince’ and ‘The Guard’ plus an early sneak peek at ‘The One’, Q&A with Kiera Cass and more…

‘The Prince’:
Before America arrived at the palace to compete in the Selection, there was another girl in Prince Maxon’s life.

A captivating view into the heart of Prince Maxon before he fights to win America Singer’s love.

‘The Guard’:
Raised as a Six, Aspen Leger never dreamed that he would find himself living in the palace as a member of the royal guard. An inside look at Aspen’s life within the palace walls – and the truth about a guard’s world that America will never know.

Kiera Cass graduated from Radford University with a degree in History. She grew up in South Carolina and currently lives in Blacksburg, Virginia with her family. In her spare time, Kiera enjoys reading, dancing, making videos and eating unhealthy amounts of cake. You can learn more about Kiera at kieracass.com, follow her on twitter via @kieracass, and see her silly videos at YouTube.com/user/kieracass.