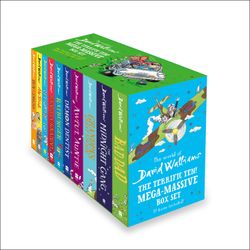 David Walliams continues to take the literary world by storm. His tenth novel, BAD DAD, was an immediate number one, following the triumph of THE MIDNIGHT GANG, the biggest-selling children’s book of 2016. THE WORLD’S WORST CHILDREN 2, spent four weeks at industry number one.David’s books have now exceeded 100 non-consecutive weeks at children’s number one, and have been translated into 54 languages, selling more than 30 million copies worldwide.