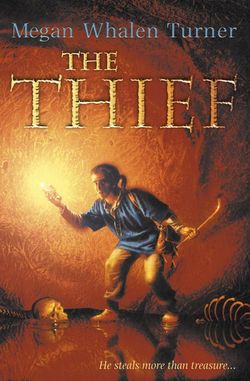 Newbery Medal winning fantasy, set in a world not unlike Ancient Greece, complete with interfering Gods and Goddesses.

The King’s magus believes he knows the site of an ancient treasure – Hamiathe’s Gift. To attain it, he needs a skillful thief and he selects Gen from the King’s prison. The magus is only interested in the thief’s abilities; what Gen is interested in is anyone’s guess.

A likeable rogue, Gen endures the difficult trek with much complaining and little grace, but shows his mettle when he steals the Gift twice and risks his life for his companions.

The Thief is an exciting and compelling ‘road-movie’ story, with a cracking twist at the end which surprises both the magus and Gen’s travelling companions – not to mention the reader!!

Megan Whalen Turner is married to a professor and often relocates when he needs to do research. When they travelled to Greece one summer, she decided to use its landscape as the background of a book, but didn’t write The Thief until she was spending a year in California, where the olive trees reminded her of the Greek mainland.