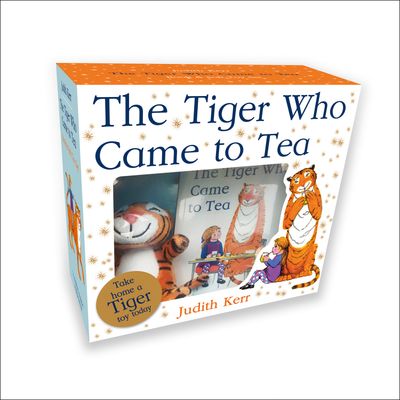 The Tiger Who Came to Tea: Book and Toy Gift Set

This classic tale is loved by millions of children all over the world, and now you too can have tea with your very own cuddly tiger, with this beautiful book and toy gift set.

The doorbell rings just as Sophie and her mummy are sitting down to tea. Who could it possibly be? What they certainly don’t expect to see at the door is a big furry, stripy tiger!

This timeless picture book, beloved of many generations, is now presented as a beautiful book and toy gift set. Now you can have tea with Sophie and the Tiger too, with your very own cuddly tiger toy and miniature paperback book!

Author: Judith Kerr
Format: Other Format
Ageband: 2 to 6
Release Date: 03 Oct 2019
Pages: 32
ISBN: 978-0-00-820388-7
Price: £11.89 (Export Price) , £12.99
Judith Kerr OBE was born in Berlin. Her family left Germany in 1933 to escape the rising Nazi party, and came to England. She studied at the Central School of Art and later worked as a scriptwriter for the BBC. Judith married the celebrated screenwriter Nigel Kneale in 1954. She left the BBC to look after their two children, who inspired her first picture book, The Tiger Who Came to Tea. Published in 1968 and never out of print in the fifty years since, it has become a much-loved classic and perennial bestseller. Judith was awarded the Booktrust Lifetime Achievement Award in 2016, and in 2019 was named Illustrator of the Year at the British Book Awards. Judith died in May 2019 at the age of 95, and her stories continue to entertain and delight generations of children.

”'Kerr is one of the best authors a child of 3+ could encounter.” - The Times

”'A modern classic.” - The Independent

Praise for ‘Mog the Forgetful Cat’: -

”'Grandparents are likely to get as much fun out of seeing it again as the new generation of fans just learning to read!” - Choice Magazine