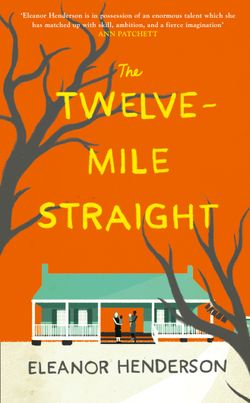 ‘Eleanor Henderson is in possession of an enormous talent’ Ann Patchett

Genus Jackson was killed in Cotton County, Georgia, on a summer midnight in 1930, when the newborn twins were fast asleep.
They lay head to toe in a cradle meant for one, Winnafred on one side and Wilson on the other.
Only if you looked closely – and people did – could you see that the girl was pink as a piglet, and the boy was brown.

In a house full of secrets, two babies – one light-skinned, the other dark – are born to Elma Jesup, a white sharecropper’s daughter. Accused of her rape, field hand Genus Jackson is lynched and dragged down the Twelve-Mile Straight, the road to the nearby town.

Despite the prying eyes and curious whispers of the townspeople, Elma begins to raise her babies as best as she can, under the roof of her impulsive father, Juke, and with the help of Nan, the young black housekeeper who is as close to Elma as a sister. It soon becomes clear that the ties that bind all of them together are more intricate than any could have imagined. A web of lies begins to collapse around the family, destabilizing their precarious world and forcing all to reckon with the truth.

Eleanor Henderson’s debut novel Ten Thousand Saints was named one of the 10 Best Books of 2011 by the New York Times and was a finalist for the Art Seidenbaum Award for First Fiction from the Los Angeles Times. An associate professor at Ithaca College, she lives in Ithaca, New York, with her husband and two sons.