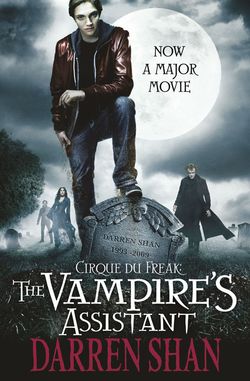 Cirque Du Freak, The Vampire’s Assistant and Tunnels of Blood, all in one bumper volume. These are the first three books in The Saga of Darren Shan on which the movie THE VAMPIRE’S ASSISTANT is based.

Darren Shan is just an ordinary schoolboy – until he gets an invitation to visit the Cirque du Freak… until he meets Madame Octa… until he comes face-to-face with a creature of the night!

Now Darren Shan’s internationally successful vampire series is coming to the big screen in 2009. The much-anticipated film adaptation of the first three titles is coming to cinemas on October 23rd 2009.

Darren Shan is the author of the monsterific ten book series known as ‘The Demonata’ and the twelve book vampire series 'The Saga of Darren Shan'. His adventures have been read by millions of people around the world in several different languages, yet much of his life remains shrouded in mystery. He lives in seclusion in the depths of Ireland. And he never drinks blood. Or so he claims.