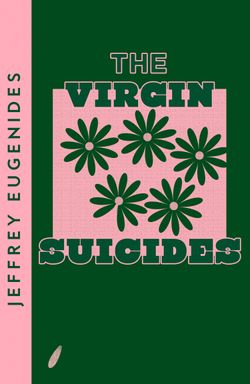 The five Lisbon sisters – beautiful, eccentric and, now, gone –had always been a point of obsession for the entire neighbourhood.

Although the boys that once loved them from afar have grown up, they remain determined to understand a tragedy that has defied explanation. The question persists – why did all five of the Lisbon girls take their own lives?

This lyrical and timless tale of sex and suicide that transforms and mythologizes suburban middle-American life announced the arrival of one of the greatest American novelists of the last thirty years.

‘A flare from my own secret world, all the inchoate longings and obsessions of being a teenager somehow rendered into book form’ Emma Cline, author of The Girls

Jeffrey Eugenides was born in Detroit and attended Brown and Stanford Universities. His first novel, The Virgin Suicides, was published by FSG to great acclaim in 1993, and he has received numerous awards for his work. In 2003, he received the Pulitzer Prize for his novel Middlesex (FSG, 2002), which was also a finalist for the National Book Critics Circle Award, the International IMPAC Dublin Literary Award, and France’s Prix Médicis. The Marriage Plot (FSG, 2011) was a finalist for the National Book Critics Circle Award, and won both the Prix Fitzgerald and the Madame Figaro Literary Prize. Eugenides is a professor of creative writing in the Lewis Center for the Arts at Princeton.