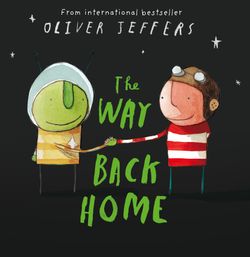 Once there as a boy, and one day, he found an aeroplane in his cupboard…

He didn’t remember leaving it in there, but he thought he’d take it out for a go right away. At first, all went well and the plane flew higher and higher and higher until… suddenly, with a splutter, it ran out of petrol. The boy was stuck on the moon… and he was not alone…