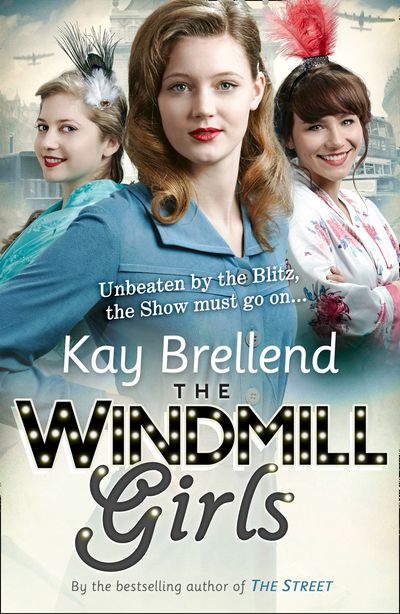 A compelling wartime drama from the author of The Street, perfect for fans of Pam Weaver and Kitty Neale.

The Windmill Theatre was one of the most famous clubs of the 20th century. Its heyday was during WWII when it famously ‘never closed’ and it became famous for its ‘tasteful’ nude performances. Dawn is a pretty and feisty blonde. Losing her job as a chambermaid, she goes to work as a dancer at The Windmill Theatre. Despite refusing to appear on stage naked, Dawn is taken on and soon gets a glimpse of London’s dark and seductive underbelly. She meets Olive, Renee and Rosie, women all with their own secrets to bear. Each of them will be have to draw on their courage to survive, not just Hitler and his bombs, but by the life they have chosen and the men that they cannot escape…

Author: Kay Brellend
Format: Paperback
Release Date: 15 Jan 2015
Pages: 400
ISBN: 978-0-00-757528-2
Price: £7.99 (Export Price) , £7.99
Kay Brellend, the third of six children, was born in North London but now lives in a Victorian farmhouse in Suffolk. Under a pseudonym she has written sixteen historical novels published in England and North America. This is her first novel set in the twentieth century and was inspired by her grandmother\'s reminiscences about her early life in Campbell Road, Islington.

Brilliant read! Really takes you through a journey of hardship love hate etc. Was gripped from beginning to end!!!By Woo -

This book was excellent, I didn't want it to end. Reading it made me feel like I was living in the era the book was set in.By Amanda Bicknell -

What a wonderful read…having been born near this area l could see the places and people as described, could not wait to read a few more chapters each night but was so sad when l finished it.By LondonSue -

loved this book the sort you pickup and can’t put back down, the setting and characters really come to life, it's as if you can see it and breath it. Wonderful.By K -