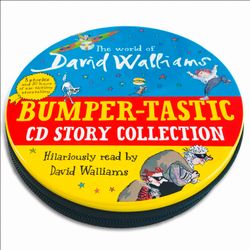 All eight hilarious and heart-warming stories from number one bestselling children’s author, David Walliams, together for the first time in this BUMPER-TASTIC CD collection, read by the author himself!

THE BOY IN THE DRESS:
Dennis’s very ordinary life is about to get a lot more extraordinary. Why? There’s a clue in the title of this book…

MR STINK:
When Chloe decides to hide a homeless man in her garden shed, she discovers there’s more to Mr Stink than meets the nose…

GANGSTA GRANNY:
Like most grannies, Ben’s has white hair, false teeth… but she is an international jewel thief too!

BILLIONAIRE BOY:
Joe has a lot of reasons to be happy. About a billion pounds’ worth of them, in fact. There’s just one thing he doesn’t have – a friend…

RATBURGER:
Can Zoe keep her beloved pet rat safe from the clutches of dastardly Burt of Burt’s Burgers and his dubious burger-making machine?

GRANDPA’S GREAT ESCAPE:
Many years ago Grandpa was a World War II flying ace. But when he is sent to old folk’s home Twilight Towers – run by sinister Matron Swine – it’s up to Grandpa and his grandson, Jack, to plot a daring escape…