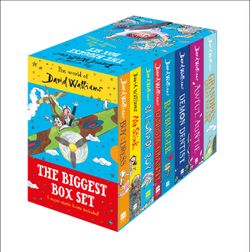 GRANDPA’S GREAT ESCAPE:
Many years ago Grandpa was a World War II flying ace. But when he is sent to old folk’s home Twilight Towers – run by sinister Matron Swine – it’s up to Grandpa and his grandson, Jack, to plot a daring escape. Little do they know, the wicked matron is on to them…