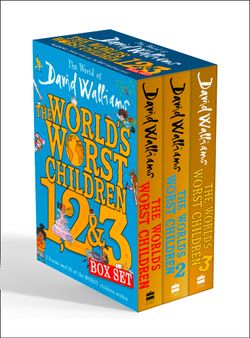 An entire world of hilariously horrible and delightfully dreadful children in one incredible box set! From the phenomenal number-one bestseller David Walliams, these cautionary tales are illustrated in glorious and gruesome colour by artistic genius, Tony Ross.

THE WORLD’S WORST CHILDREN
Are you ready to meet the World’s Worst Children? Five beastly boys and five gruesome girls!

THE WORLD’S WORST CHILDREN 2
Ready for more? The beastly boys and gruesome girls in this book are even ruder, even more disgusting and WORSE than you could ever imagine!

The gruesome characters will make you snort with laughter and thank your lucky stars that you don’t know anyone like Gruesome Griselda or Fussy Frankie in real life. It also features a special appearance from fan-favourite Raj!

THE WORLD’S WORST CHILDREN 3
Just when you thought it was safe to go back to your bookshelf, 10 more horrendously hilarious stories about the absolute worst children ever!

From ten-year old Hank and his endless pranks on his poor, long-suffering family, to Tandy and her titanic tantrums – this compendium of catastrophically horrid boys and girls is the perfect companion to books 1 and 2.