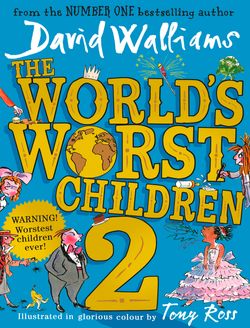 If you thought you had read about the World’s Worst Children already, you’re in for a rather nasty shock. The beastly boys and gruesome girls in this book are even ruder, even more disgusting and WORSE than you could ever imagine!

This gorgeous hardback collection of ten stories from the master himself, David Walliams, will make you snort with laughter and thank your lucky stars that you don’t know anyone like Gruesome Griselda or Fussy Frankie in real life. It also features a special appearance from fan-favourite Raj! Gloriously illustrated in full colour throughout by artistic genius Tony Ross, The World’s Worst Children 2 is a side-splitting companion to David’s blockbuster hit, The World’s Worst Children, and the perfect gift for kids aged 9 and up.