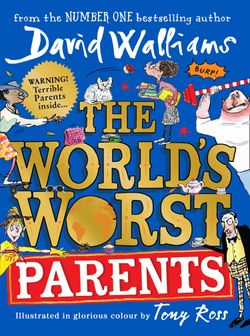 Millions of young readers have loved the World’s Worst Children tales and revelled in the World’s Worst Teachers with their delightfully dreadful deeds – now prepare for…THE WORLD’S WORST PARENTS! From the phenomenally bestselling David Walliams and illustrated in glorious colour by the artistic genius, Tony Ross.

Are you ready to meet the worst parents ever?

Sure, some parents are embarrassing – but they’re NOTHING on this lot. These ten tales of the world’s most spectacularly silly mums and deliriously daft dads will leave you rocking with laughter.

Pinch your nose for Peter Pong, the man with the stinkiest feet in the world… jump out of the way of Harriet Hurry, the fastest mum on two wheels… watch out for Monty Monopolize, the dad who takes all his kids’ toys… and oh no, it’s Supermum! Brandishing a toilet brush, a mop and a very bad homemade outfit…