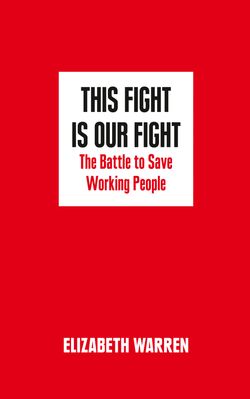 has become a rallying cry for millions of those fed up with phony promises and governments that no longer serve their people. In this inspiring #1 New York Times bestseller and inspiring book, U.S. Senator Elizabeth Warren argues for a fair future for ordinary working people. Join the fight!

In this passionate book, one of America’s leading progressive voices empowers those who wish for a fairer society. This Fight Is Our Fight lays out the many wrongs Democrat Senator Elizabeth Warren seeks to right and builds on her meme, ‘Nevertheless, she persisted’, which spread across the world as a rallying cry for the millions who wish to fight back.

From Roosevelt’s New Deal through to President Trump’s phoney promises, this is a sharp critique of how big corporations and financial institutions overpowered the interests of poor, lower-income and middle-class people.
Writing in her trademark candid, high-spirited voice, Warren delivers a rousing call to action, outlining how government can better serve the people who now face an uncertain future. A must read for those who want a more inclusive society.

Elizabeth Warren is the senior U.S. Senator from Massachusetts. A former Harvard Law School professor, she is the author of ten books, including A Fighting Chance, a national bestseller that received widespread critical acclaim. One of nation’s most influential progressives, she has long been a champion of working families and the middle class. The mother of two and grandmother of three, she lives in Cambridge, Massachusetts, with her husband, Bruce Mann.