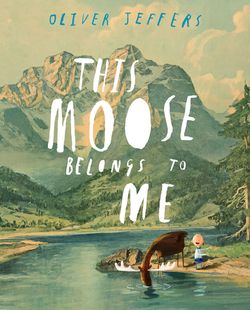 WINNER of the Irish Book Awards Children’s Book of the Year 2012 and the Honour Award for Illustration from Childrens’ Books Ireland, 2013.

“Wilfred owned a moose. He hadn’t always owned a moose. The moose came to him a while ago and he knew, just KNEW, that it was meant to be his. He thought he would call him Marcel.”

Most of the time Marcel is very obedient, abiding by the many rules on How to Be a Good Pet. But one dark day, while deep in the woods, someone else claims the moose as their own…

Is Marcel really Wilfred’s pet after all?

An beautifully-illustrated, witty and thought-provoking story, exploring the concept of ownership.