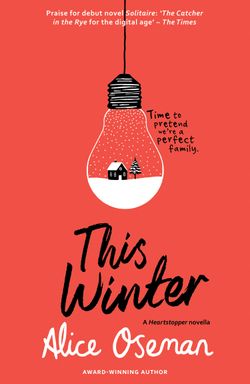 A short novella based on the beloved characters from the graphic novel Heartstopper and Alice Oseman’s debut novel Solitaire, which was praised as ‘The Catcher in the Rye for the digital age’ by The Times.

The festive season isn’t always happy for Tori Spring and her brother Charlie. And this year’s going to be harder than most.

I used to think that difficult was better than boring, but I know better now…

I’m not going to think about the past few months, about Charlie and me, and all of the sad. I’m going to block it all out Just for today.

Alice Oseman was born in 1994 in Kent, England. She completed a degree in English at Durham University in 2016 and is currently a full-time writer and illustrator. Alice can usually be found staring aimlessly at computer screens, questioning the meaninglessness of existence, or doing anything and everything to avoid getting an office job. Alice's first book, SOLITAIRE, was published when she was nineteen.