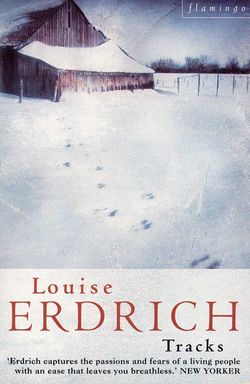 A New York Times Bestseller, ‘Tracks’ is a masterpiece from Louise Erdrich, winner of the National Book Award for Fiction 2012 – a story for our times, narrated by a uniquely twentieth century figure.

By turns reticent, garrulous, spiritual and profane, Nanapush, like the Native American culture he belongs to, is a living contradiction – alien, beguiling, strong and dying…

Set in North Dakota, at a time in the early twentieth century when Indian tribes were struggling to keep what little remained of their lands, ‘Tracks’ is a tale of passion and deep unrest. Over the course of ten crucial years, as tribal land and trust between people erode ceaselessly, men and women are pushed to the brink of their endurance – yet their pride and humour prohibit surrender.

The reader will experience shock and pleasure in encountering a group of characters that are compelling and rich in their vigour, clarity, and indomitable vitality.

Louise Erdrich is one of the most gifted, prolific, and challenging of American novelists. Born in 1954 in Minnesota, she grew up mostly in North Dakota, where her parents taught at Bureau of Indian Affairs schools. Her fiction reflects aspects of her mixed heritage: German through her father, French and Ojibwa through her mother. She is the author of a number of novels for adults, the first of which, Love Medicine, won the National Book Critics Circle Award. She lives in Minnesota with her children, who help her run a small independent bookstore called The Birchbark.