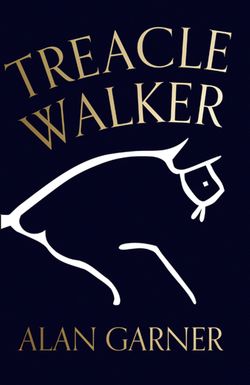 Treacle Walker is a stunning fusion of myth and folklore and an exploration of the fluidity time, vivid storytelling that illuminates an introspective young mind trying to make sense of everything around him.

Joe looked up from his comic and lifted his eye patch. There was a white pony in the yard. It was harnessed to a cart, a flat cart, with a wooden chest on it. A man was sitting at a front corner of the cart, holding the reins. His face was creased. He wore a long coat and a floppy high-crowned hat, with hair straggling beneath, and a leather bag was slung from his shoulder across his hip.

Joe Coppock squints at the world with his lazy eye. He reads his comics, collects birds’ eggs and treasures his marbles, particularly his prized dobbers. When Treacle Walker appears off the Cheshire moor one day – a wanderer, a healer – an unlikely friendship is forged and the young boy is introduced to a world he could never have imagined.

Alan Garner was born in Cheshire on 17th October 1934, and his childhood was spent in Alderley Edge, where his family has lived for more than four hundred years. He was awarded the OBE in 2001, for his services to literature.