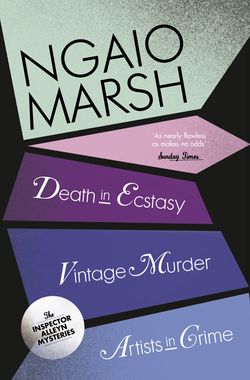 Commemorating 75 years since the Empress of Crime’s first book, the second volume in a set of omnibus editions presenting the complete run of 32 Inspector Alleyn mysteries.

DEATH IN ECSTASY
Who slipped cyanide into the ceremonial wine of ecstasy at the House of the Sacred Flame? The other initiates and the High Priest claim to be above earthly passions. But Roderick Alleyn discovers that the victim had provoked lust and jealousy, and he suspects that more evil still lurks behind the Sign of the Sacred Flame…

VINTAGE MURDER
New Zealand theatrical manager Alfred Meyer is planning a surprise for his wife’s birthday – a jeroboam of champagne descending gently onto the stage after the performance. But, as Roderick Alleyn witnesses, something goes horribly wrong. Is the death the product of Maori superstitions – or something more down to earth?

ARTISTS IN CRIME
It starts as an art exercise – the knife under the drape, the pose outlined in chalk. But when Agatha Troy returns to her class, the scene has been re-enacted: the model is dead, fixed in the most dramatic pose Troy has ever seen. It’s a difficult case for Chief Detective Inspector Alleyn. Is the woman he loves really a murderess…?