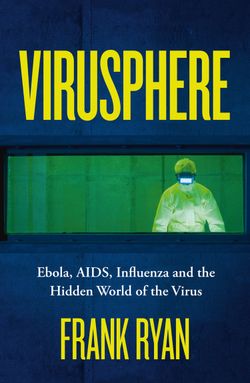 In 1993 a previously healthy young man was drowning in the middle of a desert, in fluids produced by his own lungs. This was the beginning of the terrifying Sin Nombre hantavirus epidemic and the start of a scientific journey that would forever change our understanding of what it means to be human.

After witnessing the Sin Nombre outbreak, Dr Frank Ryan began researching viral evolution and was astonished to discover that it’s inextricable from the evolution of all life on Earth. From AIDS and Ebola to the common cold, Ryan explores the role of the virus within every ecosystem on the planet. His gripping conclusions shed new light on the natural world, proving that what doesn’t kill you really does make you (and your species) stronger.

Originally qualified as a doctor, Frank Ryan is now one of the pioneers of the role of viruses in evolution. He is emeritus consultant physician at the Sheffield Teaching Hospitals, and Fellow of the Royal College of Physicians, the Linnaean Society of London and the Royal Society of Medicine.   He is the author of four general books, including a New York Times NON-FICTION BOOK OF THE YEAR (Tuberculosis: The Greatest Story Never Told).