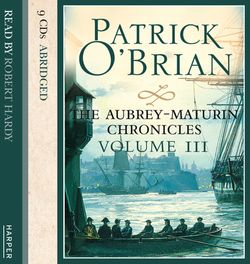 For the first time ever Patrick O’Brian’s famous and much-loved Aubrey-Maturin novels will be available on audio CD – as omnibus editions and split into seven volumes.

Follow the adventures of Jack Aubrey and his ship’s surgeon Stephen Maturin. Theirs is one of the greatest friendships in all literature. These collections are a perfect tribute to such a literary achievement and a perfect gift for the O’Brian enthusiast.

Collection Three contains The Surgeon’s Mate, The Ionian Mission and The Treason’s Harbour.

Patrick O’Brian, until his death in 2000, was one of our greatest contemporary novelists. He is the author of the acclaimed Aubrey–Maturin tales and the biographer of Joseph Banks and Picasso. He is the author of many other books including Testimonies, and his Collected Short Stories. In 1995 he was the first recipient of the Heywood Hill Prize for a lifetime’s contribution to literature. In the same year he was awarded the CBE. In 1997 he received an honorary doctorate of letters from Trinity College, Dublin. He lived for many years in South West France and he died in Dublin in January 2000.