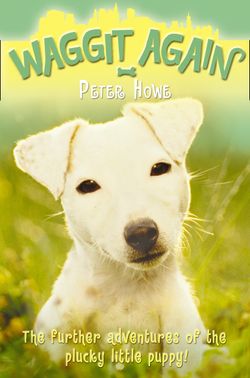 Waggit the plucky puppy is back for another adventure as he tries to find his way back to his old pack in Central Park, New York.

Waggit’s owner has taken him to the country while she goes on the road to sing, but Waggit thinks he’s been abandoned again! The other dogs on the farm are mean, and Waggit wants to go back to the city. He breaks free, and sets off! On the way, he meets Felicia, a homeless dog whisperer, and Lug, a scared pit bull, and together they journey back to Central Park.

Once Waggit reunites with the team of wild dogs who live in the park, he realises a lot has changed for the pack now that Olang, Tazar’s sinister son, is second in command and when Waggit sees his old owner in the park, will he decide to stay with the team or go back to her?

Peter Howe was born in London and has lived in New York for thirty years, where he currently resides with his wife and two dogs. He is a former New York Times Magazine and Life magazine picture editor. Waggit’s tale his first novel for children is based on the real life of his dog Roo, whom he found abandoned in Central Park in 1981.