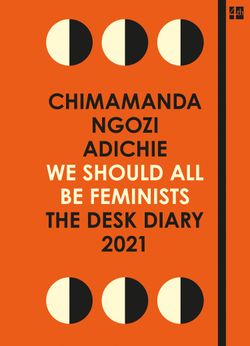 A beautiful hardback, elastic hinged desk diary with a week to a view alongside an inspiring and powerful quote or a photograph of Chimamanda and a brand-new introduction from her.

‘We teach girls to shrink themselves, to make themselves smaller.’

‘Not one day longer.’

This year, with some words of wisdom to inspire you, you will walk tall. Make 2021 your biggest year yet, with this beautifully designed hardback diary filled with some of Chimamanda Ngozi Adichie’s most inspirational quotes.

From her award-winning novels like Half of a Yellow Sun and Americanah, to her stirring calls to arms We Should All Be Feminists and Dear Ijeawele, from her countless magazine covers, her work with Beyoncé and sharing the stage with Michelle Obama, Chimamanda Ngozi Adichie is one of the most defining and stirring voices of our time – a truly modern icon. Now, each day, Adichie will inspire you to stand up and be heard.

Start your year off on the right foot and be inspired to be exactly who you want to be in 2021.

Chimamanda Ngozi Adichie is the author of Purple Hibiscus, which was longlisted for the Booker Prize, Half of a Yellow Sun, which won the Orange Prize for Fiction; and acclaimed story collection The Thing Around Your Neck. Americanah, was published around the world in 2013, received numerous awards and was named one of New York Times Ten Books of the Year. A recipient of a MacArthur Foundation Fellowship, she divides her time between the United States and Nigeria.

Digital Assets: We Should All Be Feminists: The Desk Diary 2021