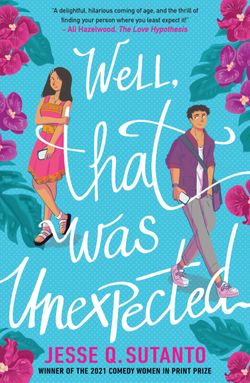 Crazy Rich Asians meets To All the Boys I’ve Loved Before in this an outrageous, laugh-out-loud yet heartfelt YA fake dating romcom, from the winner of the Comedy Women in Print Prize

When Sharlot Citra is caught with her very hot (but very secret) boyfriend by her traditional mother, she finds herself whisked away from LA to Indonesia for a summer of ‘getting back to her roots’. Or so her mother thinks.

Across the globe, George Clooney Tanuwijaya, tested with a name that is a daily embarrassment, is tested further when his father and sister, Eleanor Roosevelt, decide to take it upon themselves to find him a respectable girlfriend. His family—one of the wealthiest, most famed in Indonesia—has a reputation to uphold.

Sharlot and George’s worlds collide when they discover that their parents have secretly been pretending to be them online. They agree to meet once, just to shut their parents up. But when the media gets wind of their date, things quickly spiral and the two families get swept up in a highly publicised stunt where everyone has a role to play. And a secret to keep.

PRAISE FOR WELL, THAT WAS UNEXPECTED

“Well, That was Unexpected is a delightful, hilarious, captivating love letter to Indonesia, and coming of age in a large meddlesome family, and the thrill of finding your person where you least expect it!”–Ali Hazelwood, New York Times bestselling author of The Love Hypothesis

“A hilarious, heartfelt rom-com with a refreshing take on matchmaking, complete with embarrassing, yet well meaning, parents and a social media twist.”–Krystal Marquis, author of The Davenports

“Charming and immersive, this book feels like taking a trip to Indonesia. Jesse Q. Sutanto writes such vibrant characters, with gorgeous descriptions of setting, culture, and food. Don’t read this on an empty stomach!”–Nicole Lesperance, author of The Depths