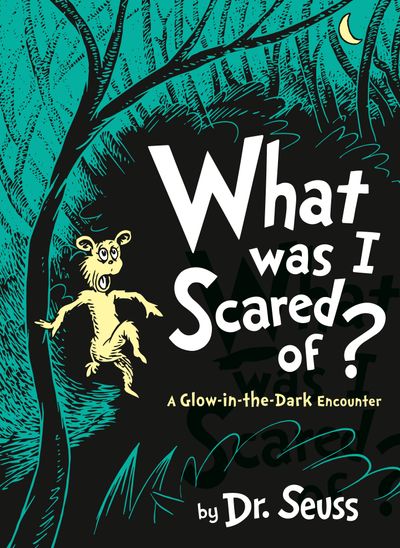 What Was I Scared Of?

Then I was deep within the woods
When, suddenly, I spied them.
I saw a pair of pale green pants
With nobody inside them!

Turn out the lights and say hello to Dr. Seuss’s spookiest character… the pair of empty trousers, with nobody inside them!
First published as part of The Sneetches and Other Stories collection, this all-time favourite story of Dr. Seuss’s is now published on its own in this very special edition with a glow-in-the-dark finale!

Make sure you hold the glow in the dark under a light source to charge up the pages, then enjoy a spooky surprise in the darkness!

A perfect present for boys and girls from ages three and up.

Format: Hardback
Ageband: 3 to 7
Release Date: 07 Sep 2017
Pages: 32
ISBN: 978-0-00-825260-1
Price: £12.99 (Export Price) , £12.99
Theodor Seuss Geisel – better known to his millions of fans as Dr. Seuss – was born the son of a park superintendent in Springfield, Massachusetts, in 1904. After studying at Dartmouth College, New Hampshire, and later at Oxford University in England, he became a magazine humorist and cartoonist, and an advertising man. He soon turned his many talents to writing children’s books, which included the creation of the one and only ‘The Cat in the Hat’, published in 1957, which went on to become the first of a successful range of early learning books known as Beginner Books.

”'[Dr. Seuss] has…instilled a lifelong love of books, learning and reading [in children]” - The Telegraph

”'Dr. Seuss ignites a child’s imagination with his mischievous characters and zany verses” - The Express

”'The magic of Dr. Seuss, with his hilarious rhymes, belongs on the family bookshelf” - Sunday Times Magazine

”'The author… has filled many a childhood with unforgettable characters, stunning illustrations, and of course, glorious rhyme” - The Guardian