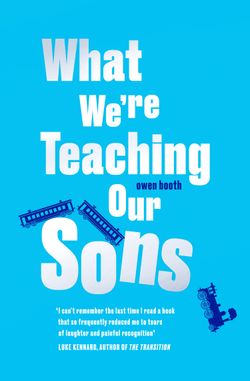 Wise and funny, touching and true, What We’re Teaching Our Sons is for anyone who has ever wondered how to be a grown up.

We’re teaching them about sex, although everyone would be a lot happier if the subject had never come up…

Meet the married Dads, the divorced Dads, the widowed Dads and the gay Dads; the gamblers, the firemen, the bankers, the nurses, the soldiers and the milkmen. They’re trying to guide their sons through the foothills of childhood into the bewildering uplands of adulthood. But it’s hard to know if they’re doing it right.

Or what their sons’ mothers think…

Wise and funny, touching and true, What We’re Teaching Our Sons is for anyone who has ever wondered how to be a grown up.

Owen Booth is a journalist, copywriter and father of two sons. He lives in Walthamstow, London. He won the 2015 White Review Short Story Prize and was recently awarded 3rd prize in the Moth Short Story competition. His work has been published in numerous print and online magazines and anthologies.