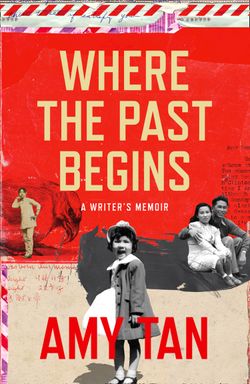 From New York Times bestselling author Amy Tan, a memoir on her life as a writer, her childhood and the symbiotic relationship between fiction and emotional memory.

In Where the Past Begins, bestselling author of The Joy Luck Club and The Valley of Amazement Amy Tan is at her most intimate in revealing the truths and inspirations that underlie her extraordinary fiction.

By delving into vivid memories of her traumatic childhood, confessions of self-doubt in her journals and heartbreaking letters to and from her mother, she gathers together evidence of all that made it both unlikely and inevitable that she would become a writer. Through spontaneous storytelling, she shows how a fluid fictional state of mind unleashed near-forgotten memories that became the emotional nucleus of her novels.

Tan explores shocking truths uncovered by family memorabilia – the real reason behind an I.Q. test she took at age six, why her parents lied about their education, mysteries surrounding her maternal grandmother – and, for the first time publicly, writes about her complex relationship with her father, who died when she was fifteen.

Written with candour and characteristic humour, Where the Past Begins takes readers into the idiosyncratic workings of her writer’s mind, a journey that explores memory, imagination, and truth.

Amy Tan is the author of The Valley of Amazement, The Joy Luck Club, The Kitchen God’s Wife, The Hundred Secret Senses, The Bonesetter’s Daughter, The Opposite of Fate: Memories of a Writing Life, and two children’s books. Tan was also a co-producer and co-screenwriter of the film version of The Joy Luck Club. She lives with her husband and her dogs in California and New York.