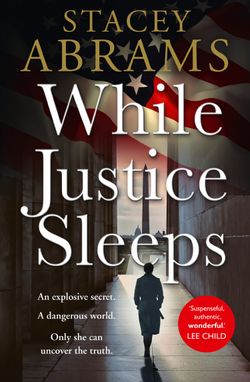 An explosive secret
When legendary Washington judge Justice Wynn falls into a coma and puts his law clerk, Avery, in control, Avery’s world is turned upside down. Because Justice Wynn had a secret. One that nobody wants to come out…

A life in the balance
As Wynn lies in hospital, Avery begins to unravel a sequence of clues, and realizes the puzzle will lead her directly into danger.

A showdown that will change everything
But how high a price can you put on the truth? And is Avery brave enough to expose the White House itself?

A gripping political thriller from the activist, leader, and speaker Stacey Abrams.

Stacey Abrams is the two-time New York Times bestselling author of Our Time Is Now and Lead from the Outside, an entrepreneur, and a political leader. She served eleven years in the Georgia House of Representatives, seven as Minority Leader, and became the 2018 Democratic nominee for governor of Georgia, where she won more votes than any other Democrat in the state's history. She has launched multiple organizations devoted to voting rights, training and hiring young people of color, and tackling social issues at the state, national, and international levels. She is the founder of Fair Fight, Fair Count, and the Southern Economic Advancement Project. Abrams is a lifetime member of the Council on Foreign Relations and sits on the advisory board of Climate Power 2020 and the advocacy board of the Women's National Basketball Players Association. She has received degrees from Spelman College, the LBJ School of Public Affairs at the University of Texas, and Yale Law School.