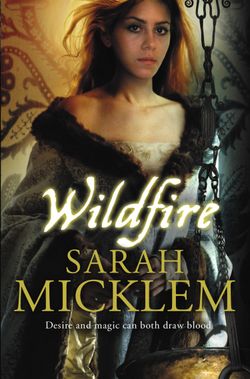 Firethorn’s story continues as her mysterious past unfolds in book two of Sarah Micklem’s unique and powerful quasi-medieval fantasy.

What the Gods give, the Gods can take away. The sacred Firethorn tree bestowed curious talents on the orphan once known as Luck. But when she is struck by wildfire as she follows her master Galan to war, her powers of healing and shadow-walking take on a new, bizarre strength. Soon she is suspected of witchcraft, even by Galan.

Yet Firethorn’s dreams are useful to those in power. After the invaders win a climactic battle, Firethorn is captured by King Corvus, who is fleeing with the remnants of his defeated army.

He takes refuge in a neighbouring kingdom, where Firethorn finds the village where she was born and learns that her parents – horse farmers and traders – were killed in a previous war. Corvus uses her as a decoy in a plot to regain his kingdom; she goes along with the plot, living the life of a privileged aristocrat, in order to return to Galan.

Sarah Micklem had jobs in a restaurant, printing plant, sign shop, and refugee resettlement agency before discovering that graphic design was an enjoyable way to make a living. She wrote Firethorn while working as an art director for children's magazines in New York City. She lives with her husband, poet and playwright Cornelius Eady, in Washington, DC.