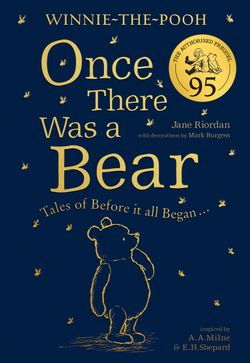 This timeless story collection is a real tribute to the world’s most famous bear and the perfect opportunity for everyone to revisit these favourite friends and find out how they become the larger than life characters that we all know and love.

Other Winnie-the-Pooh books to enjoy:

Sequel Stories:
The Best Bear in All the World
Return to the Hundred Acre Wood

Jane Riordan originally trained to be a primary school teacher but her love of children’s books led to a career in publishing. Since then, she has edited and written countless books for children, most notably Winnie-the-Pooh Goes to London and Once There Was a Bear.The official Winnie-the-Pooh prequel is written in the style of the original Winnie-the-Pooh stories by A.A.Milne with illustrations created by Mark Burgess, that echo E.H.Shepard’s iconic original decorations.