Take a look at the incredible new trailer for Adrift. A compelling, at times devastating, ultimately inspiring account of how much can go wrong on the ocean and how, miraculously, one woman conquered her own fears. Now a major motion picture starring Shailene Woodley and Sam Claflin. HarperCollins will be publishing a film tie-in edition to accompany the film’s release.

Young and in love, their lives ahead of them, Tami Oldham and her fiancé Richard Sharp set sail from Tahiti under brilliant blue skies, with Tami’s hometown of San Diego as their ultimate destination. But less than two weeks into their voyage, disaster struck. Despite their best efforts to steer clear of an approaching hurricane, they became trapped in the storm’s path, and found themselves battling pounding rain, waves the size of skyscrapers, and 140 knot winds. Richard tethered himself to the boat and sent Tami below to safety, and then all went eerily quiet. Tami’s last memory was her fiancé’s scream, followed by darkness. She awoke hours later, alone, venturing on deck to discover only Richard’s safety line, the clasp meant to hold him broken.

Adrift is the story of Tami’s miraculous forty-one-day journey to safety on a ravaged boat with no motor and no masts, sustained by Richard’s memory to guide her. It’s an unforgettable tale of love, loss, and survival on the high seas, and an inspiring reminder that even in our darkest moments, we are never truly alone.

You can watch the stunning new film trailer here. 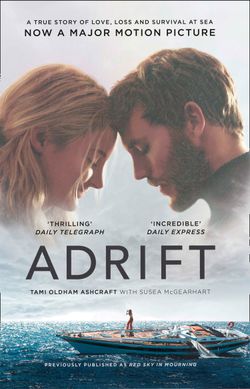 Adrift: A True Story of Love, Loss and Survival at Sea