A2 Posters for our humorous new football book King Power are now available to order.

On 25th March 2015, when King Richard III was reburied in Leicester Cathedral, his beloved football team had just lost 4-3 to Tottenham Hotspurs and were bottom of the Premiership, relegation certainties. Nine days later they beat West Ham 2-1 and have hardly lost a game since. 5000-1 outsiders at the beginning of this season, they now find themselves on the verge of the greatest upset in sporting history.

Here, in his own words, King Richard III tells this, the most remarkable sporting story of all from his unique and privileged perspective: the goals, the games, the dressing room banter, he travelled to every match in the owner’s chopper. He tells us his version of the Princes in the Tower scandal mulled over during the lost centuries, buried in a municipal carpark while The Foxes languished in the lower leagues; the Jamie Vardy story, from prosthetics factory employee to the most celebrated striker this side of the River Soar; how early season he made the trip to captain Wes Morgan’s city centre tattoo parlour to have the club owner’s name — Vichai Srivaddhanaprabba — emblazoned between his capacious shoulder blades; Mahrez, the great Muslim dynamo from Algeria, once stuck in the French seventh league; the dark days of the sex video and the late December wobble; the Post Horn Gallop (which reminds him of Bosworth and gets on his nerves); Drinkwater, Albrighton and the great Tinkerman from Italy, all of them heroes of Shakespearian proportions.

This isn’t a fairytale, this is really happening. From a much loved Royal, the greatest football book ever written.

Designs for the posters are below and can be ordered under the ISBN 9780007957835 – please email Jamie@HarperReach.com to find out more. 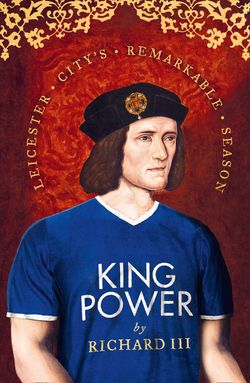