Out now, Pax is a profound and moving story written by Sara Pennypacker, with stunning illustrations by award-winning illustrator, Jon Klassen, The book is destined to become a classic in the vein of Charlotte’s Web and Watership Down. Here, a group of young Lovereading4kids members tell us, in their own, words, what they thought of this lovely book.

This story is full of adventure and shows the friendship of a boy and his pet. It shows the joys of friendship and the upsets of losing something but knowing it is the right thing to do.

The story is based on two main characters – a little boy called Peter and his pet fox Pax. Peter is told by his father, he has to release his pet fox. Pax made new fox friends and soon learns how to catch and eat prey, and soon after he and a friend had to save his friend’s younger brother. Peter sees Pax and realises he is better living as a wild animal than as a pet. Little did Peter know that he released Pax in a wood which was about to become a battlefield.

The illustrations are beautiful.

‘Pax’ is an exciting and moving story about the strong bond between a boy and his fox.

Pax is a lovely book with beautiful illustrations and a story I will never forget. Peter had a fox named Pax who he loved very much, but Peter’s father has to go to war and so he tells Peter that, before he is sent to stay with his grandfather, he must turn Pax loose. Peter would never forget that terrible day and so, on the night he arrives at his grandfather’s house, Peter sets out to find Pax and bring him home. Meanwhile Pax is on an adventure of his own…

‘Pax’ is a book packed full of wildlife, the countryside, adorable fox cubs and emotions. I couldn’t put it down and would recommend it to both adults and children, especially if they love foxes. It is a very moving story that I enjoyed a lot.

I really enjoyed this book- especially the drawings.

I liked this book. I liked that it was set in World War II because I like learning  and reading about that. I also really liked the illustrations.

‘Pax’ is the story of a boy, Peter, and his journey towards finding his beloved fox, Pax, after he lets him loose. At the start of World War II Peter is evacuated and his father tells him that he must release Pax back into the wild. Peter lets him go but he can’t believe what he has done, he even feels like he’s lost a part of himself. He sets out to find Pax but when he trips and breaks his ankle, he realises that getting to where he left Pax means helping the reclusive Vola ‘find her true personality’ which she lost during World War I. Meanwhile Pax must make new friends to survive out in the wilderness without Peter as he has never had to fend for himself before. He needs the help of Bristle, a young vixen with a good reason to hate humans, her little brother Runt, who always wants to play, a wise old fox, Grey, and his mate. They must work together to find food and water and they might have found it easy if it wasn’t for the fact that they made camp right next to an army explosives testing ground. The going is tough for both Peter and Pax but their bond is so strong that they must prevail.

Pax is the heartbreaking story of a boy, a fox and their journeys towards each other that come together in a devastating finale. I really enjoyed how the author handcrafted supporting characters with interesting back-stories to add to the overall reading experience. It was captivating, exciting and very, very sad – sad enough to bring a tear to my eye.

I was hypnotised by this book. The setting was very well described and transported me to a different reality like I was the main character. Some parts of the book were really heart wrenching, and although I don’t like sadness at all I loved the story. It made me think that war is not the answer. I thought that the cover of the book was beautiful. You’re going to totally love it.

A really moving story about a boy and his pet fox. This is on similar lines to ‘War Horse’ by Michael Morpurgo. Brilliant story. Highly recommend to children and adults!

Peter has a pet fox called Pax. One day his dad says that he has to let Pax go. This is a moving story about their special bond and if they can find each other again. Set during the War, this isn’t dissimilar to ‘War Horse’ so if you enjoyed that, you will enjoy this too. The illustrations are lovely, drawn in black and white. I love foxes so this was a great book for me to read!

‘Pax’ is an amazing book and has been my favourite so far. I like how the book starts off with Pax and Peter enjoying every aspect of life together and then they suddenly get spilt up and think they would never see each other ever again. Even though at some parts it is sad, it makes the book more heartwarming. I also like the way Sarah Pennypacker has done two story lines side by side and how Peter and Pax are getting on with their miserable lives. Overall, I really enjoyed this book and I recommend it to anyone between the ages of 11-14.

‘Pax’ is a gripping read about a boy who during the war is sent to live with his Grandfather, without his pet fox, Pax. He has to go and find his fox, or what will become of Pax?

Pax is a novel about a boy called Peter and his inseparable fox, Pax, whom Peter rescued when it was a kit. Peter’s mother is dead, and when his father enlists in the war he is forced to ditch Pax and live with his grandfather, who lives two hundred miles away. Can Peter walk two hundred miles to find his beloved fox? But war is approaching Pax, and it doesn’t look like Pax will survive. Can boy and fox be reunited before it is too late? ‘Pax’ is a very gripping read about two torn apart friends that will do anything to find each other.

Sara Pennypacker is the author of the award-winning, New York Times best-selling Clementine series, the novel Summer of the Gypsy Moths, and the picture books Pierre in Love, Sparrow Girl, and Meet the Dullards. She lives in the US. You can visit her online at www.sarapennypacker.com.

Jon Klassen is a Canadian writer and illustrator of children’s books and an animator. He won both the American Caldecott Medal and the British Kate Greenaway Medal for children’s book illustration, recognizing the 2012 picture book This is Not My Hat. 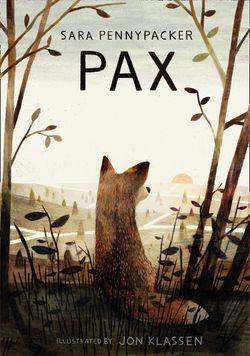