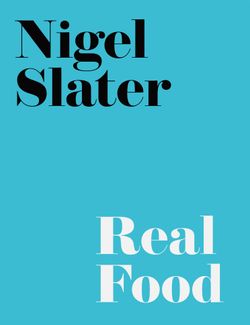 Based on Nigel Slater’s absolute favourite food, whether it be The Stickiest Ever Chicken Wings or Baked Goat’s Cheese and Pesto in Filo Pastry, Smoked Mackerel Dauphinoise or the classic Bacon Butty, this classic has gone a long way in at last creating a nation of food lovers. In typically unpretentious style, Nigel finds good things to make using mass produced white bread to the finest Italian loaves, or with standard English confectionery to real chocolate made from cocoa solids. With Nigel’s unerring understanding of flavours, irresistible, simple recipes, and passionate lively writing, ‘REAL FOOD’ deserves its place on everyone’s kitchen shelf.

Nigel Slater is the author of a collection of bestselling books and presenter of BBC 1's Simple Cooking and Dish of the Day. He has been food columnist for The Observer for twenty years. His books include the classics Appetite and The Kitchen Diaries, the critically acclaimed two-volume Tender, and most recently a second volume of The Kitchen Diaries. His award winning memoir Toast – the Story of a Boy's Hunger won six major awards and is now a BBC film starring Helena Bonham Carter and Freddie Highmore. His writing has won the National Book Awards, the Glenfiddich Trophy, the André Simon Memorial Prize and the British Biography of the Year. He was the winner of a Guild of Food Writers' Award for his BBC 1 series Simple Suppers.