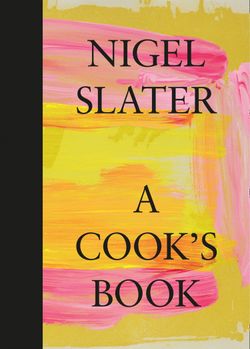 ‘If you were to only have one Slater cookbook in your life, this is it’ OFM, Books of the Year

‘He is king among food writers’ Nigella Lawson

A Cook’s Book is the story of Nigel Slater’s life in the kitchen.

From the first jam tart Nigel made with his mum standing on a chair trying to reach the Aga, through to what he is cooking now, this is the ultimate Nigel Slater collection brimming with over 200 recipes.

He writes about how his cooking has changed from discovering the best way to roast a chicken to the trick to smoky, smooth aubergine mash. He gives the tales behind the recipes and recalls the first time he ate a baguette in Paris, his love of jewel-bright Japanese pickled radishes and his initial slice of buttercream-topped chocolate cake. These are the favourite recipes Nigel Slater cooks at home every day; the heart and soul of his cooking. Chapters include: a slice of tart, a chicken in the pot, everyday greens, the solace of soup and the ritual of tea. This is the essential Nigel Slater.

Nigel Slater is an award-winning author, journalist and television presenter. He has been the food columnist for the Observer for over twenty-five years. His collectionof bestselling books includes the classics Appetite and The Kitchen Diaries and the two-volume Tender. He has made cookery programmes and documentaries for BBC1, BBC2 and BBC4. His memoir Toast – the story of a boy’s hunger won six major awards and became a film and stage production. His writing has won the James Beard Award, the National Book Award, the Glenfiddich Trophy, the Andre Simon Memorial Prize, the British Biography of the Year and the Fortnum & Mason Best Food Book. He lives in London. He was awarded an OBE in the New Year Honours in 2020 for services to cookery and literature.