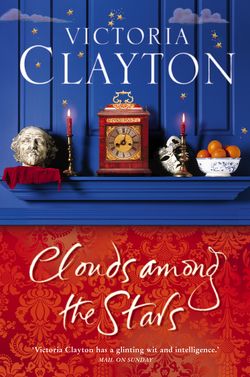 The Byng family, theatrical down to the youngest, 12 year-old Cordelia, are stunned out of even their normal self-involvement by the news that their father, the celebrated Shakespearean actor, has apparently killed his rival on stage during the last rehearsals for the new production of King Lear. Waldo Byng is arrested for murder and held in police custody : the press camp outside the house, detectives attempt to interview the family and friends, and Clarissa Byng abandons the entire scene by fleeing with her longtime companion.

It is left to the rest of the family to try to find a way through this disaster and above all to earn some money as the play is naturally cancelled. The nine months from arrest to the final trial are a wonderful learning curve about the real world for all of them, in particular for Harriet, considered the most ‘sensible’ of the remarkable family.

Clouds among the Stars is a true pleasure to read: witty, perceptive about some of our social habits, with an outstanding cast of characters, wonderful scenes including some of the best parties and theatrical behaviour; and above all written with a style, charm and verve that makes one want to start to read it again as soon as one has finished.

Victoria Clayton is married and lives in Northamptonshire. She is the author of many previous novels.