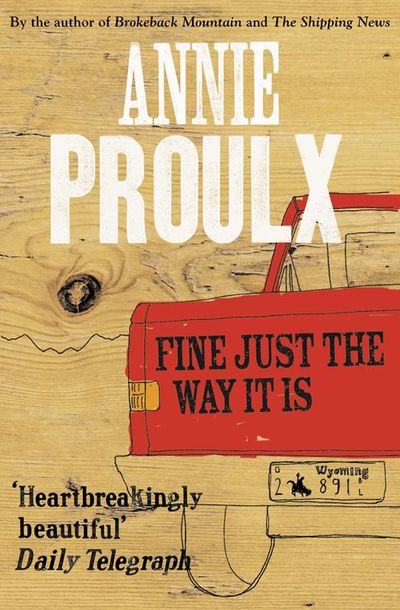 Fine Just the Way It Is: Wyoming Stories 3

The fantastic new collection of stories from the Pulitzer Prize-winning author of ‘The Shipping News’ and ‘Brokeback Mountain’.

‘Fine Just The Way It Is’ marks Annie Proulx’s return to the Wyoming of ‘Brokeback Mountain’ and the familiar cast of hardy, unsentimental prairie folk. The stories are cast over centuries, and capture the voices and lives of the settlers this sagebrushed and weatherworn country has known, from the native Indian tribes to the modern day ranch owners and politicians, and their cowboy forebears.

In ‘A Family Man’, an old man nearing the end of his life unburdens himself of the weighty family secrets that were his father’s unwelcome legacy. ‘Them Old Cowboy Songs’ follows Archie and Rosie, a young pioneer couple, and their hardships in their attempt to homestead in the exposed wintry expanses of the prairie, and ‘Testimony of the Donkey’ finds a young international couple, Marc and Caitlin, struggling with much more modern concerns, and confronting uncertainty as their relationship comes to its end.

These are stories of desperation and hard times, often marked by an inescapable sadness, set in a landscape both brutal and magnificent. Enlivened by folk tales, flights of fancy, and details of ranch and rural work, they juxtapose Wyoming’s traditional character and attitudes – confrontation of tough problems, prejudice, persistence in the face of difficulty – with the more benign values of the new west. These are bold, elegant and memorable pieces, and once more confirm Annie Proulx as one of the most talented, unique short story writers in the language.

”'Proulx is at her urgent, muscular best when elbow deep in the romance of hard souls and bittersweet lives. As a portraitist of the fearsome, awesome Wyoming landscape she is peerless. To read her descriptions of the West is to fall hopelessly and inescapable in love.” - Melanie McGrath, Evening Standard

”'A sublimely good writer about landscape and the relationship of man to landscape…Proulx's brilliance is to hedge her hard comedy with tremendous tenderness …These are meticulous, wonderfully actualised descriptions of small lives lived in a place that is lonely and unchanging, and heartbreakingly beautiful, and that is trying to kill you.” - Sam Leith, Daily Telegraph

”'Like 'Brokeback Mountain', it scrutinises and salutes the near-mute stoicism of people trapped in implacably adverse circumstances. And on the subject Proulx is incomparable.” - Peter Kemp, Sunday Times

'Despite their shared backdrop, these tales span cultures and centuries, depicting characters as diverse as a couple of young homesteaders trying to muddle through a harsh 18th century winter, and a woman raised by a ''trash rancher' returning home from Iraq. Nine in all, they vary exhilaratingly in pace, tone and length- in everything that is, but accomplishment.' Daily Mail -