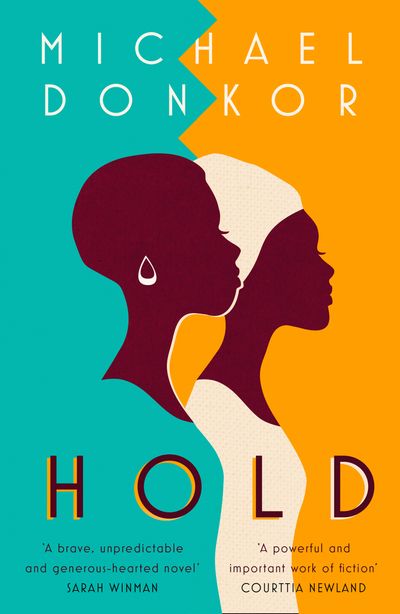 Moving between Ghana and London, Hold is an intimate coming-of-age novel. It’s a story of friendship and family, shame and forgiveness; of learning what we should cling to, and when we need to let go.

‘A powerful and important work of fiction’ Courttia Newland

Belinda is everything a good Ghanaian housegirl should be. Diligent and uncomplaining, she knows exactly how to follow the rules.

Amma has never been a great one for rule-keeping. And when her parents meet Belinda on a visit from England they suspect she might be just the shining example their wayward teenager daughter needs.

So Belinda must leave behind her old life and travel to London to befriend a girl who shows no desire for her company. But in this bewildering city, surprises are waiting down every bus route, and when the cracks in Amma’s defences open up, the secrets they have both been holding onto are brought into the light.

”At times, there are flashes of Jane Eyre in Belinda’s role as a 'governess” - of sorts, but there is no Mr Rochester to save her from her life, nor a sugary ending. The focus is on the love that flows between women and the need for Belinda to find a place that feels like home … Their lives are hard, yet a profound sense of hope resonates from within Donkor’s warm and accomplished novel. Arifa Akbar, Observer

”'Donkor’s debut novel concerns itself with those who don’t traditionally get much of a look-in when it comes to fiction: two Ghanaian house girls… A warm and intelligent story, offering full-bodied characters and a fortifying examination of courage” - Mail on Sunday

”'Hold is refreshing in its tender focus: the interior life of Belinda, and the relationship she forges with Amma … Donkor’s empathetic rendering of Belinda’s interiority is perhaps the greatest strength of a novel that is impressive both in form and in scope. Though fictional, Hold affords domestic workers, especially immigrant women, a far more nuanced emotional landscape than a significant number of nonfiction narratives” - Atlantic

”'Michael Donkor is a real talent, and Hold is a brave, unpredictable and generous-hearted novel” - Sarah Winman, author of Tin Man

”'There’s much to love in Michael Donkor’s debut novel. But it’s the emotional truths he unearths from the inner lives of three disparate women that make the novel stand up and sing. Hold is a powerful and important work of fiction” - Courttia Newland, author of The Gospel According to Cane

”'A beautiful novel. A deeply engrossing, elegant tapestry of family and friendship from a stirring new voice” - Irenosen Okojie, author of Butterfly Fish