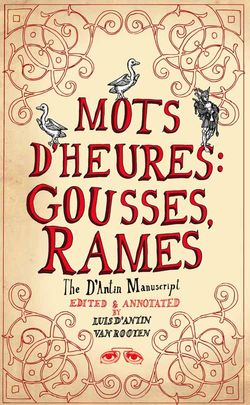 A rollicking entertainment for word lovers.

Warning: this book is addictive! The rhymes of your childhood – and your children’s childhood – sound even better (and much funnier) in the accents of Molière and Sarkozy. Once you get the point of these delectable j’aime se from the works of Mere L’Oie, you will find yourself reading them aloud to anyone who will listen.If you’ve had two years of French or eaten escargots on the Rive Gauche only once, you’re certain to fall prey to the charms of these homonymic approximations of forty familiar English nursery rhymes.

The following well-known saga of the world’s most famous omelette is a typical example:

Born in Mexico in 1906, Luis d'Antin van Rooten was raised in the United States, where he lived in New York City and Chatham, Massachussetts. Along with his obvious interest in the scholarship of language, Mr van Rooten pursued a distinguished career both in the theatre and the cinema. He appeared in many Broadway plays, and his film credits include Two Years Before the Mast; Night Has a Thousand Eyes and The Sea Chase. He also provided the voices for both the King and Grand Duke in Disney's Cinderella, so talked to himself throughout! He died in 1973.