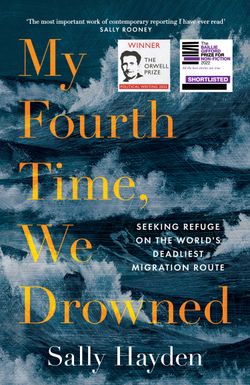 ‘The most riveting, detailed and damning account’ CHRISTINA LAMB

The Western world has turned its back on refugees, fuelling one of the most devastating human rights disasters in history.

In August 2018, Sally Hayden received a Facebook message. ‘Hi sister Sally, we need your help,’ it read. ‘We are under bad condition in Libya prison. If you have time, I will tell you all the story.’ More messages followed from more refugees. They told stories of enslavement and trafficking, torture and murder, tuberculosis and sexual abuse. And they revealed something else: that they were all incarcerated as a direct result of European policy.

From there began a staggering investigation into the migrant crisis across North Africa. This book follows the shocking experiences of refugees seeking sanctuary, but it also surveys the bigger picture: the negligence of NGOs and corruption within the United Nations. The economics of the twenty-first-century slave trade and the EU’s bankrolling of Libyan militias. The trials of people smugglers, the frustrations of aid workers, the loopholes refugees seek out and the role of social media in crowdfunding ransoms. Who was accountable for the abuse? Where were the people finding solutions? Why wasn’t it being widely reported?

At its heart, this is a book about people who have made unimaginable choices, risking everything to survive in a system that wants them to be silent and disappear.

Sally Hayden is an award-winning journalist and photographer focused on migration, conflict and humanitarian crises.She is currently the Africa correspondent for the Irish Times, and has also worked with VICE News, CNN International, the Financial Times, TIME, BBC, the Washington Post, the Guardian, the New York Times, Channel 4 News, Foreign Policy, Al Jazeera and Newsweek, among others.Sally has reported across the Middle East, Africa and Europe, from countries including Nigeria, Iraq, Syria, Sudan, Burkina Faso, Lebanon, Jordan, DR Congo, the Gambia, Rwanda, Ethiopia, Sierra Leone and Uganda. Her writing has been translated into nine languages and she has appeared on national and international media. A law graduate with an MSc in international politics, she has twice sat on the committee deciding the winner of Transparency International's Anti-Corruption Award. In 2019, she was included on the Forbes '30 Under 30' list of media in Europe.