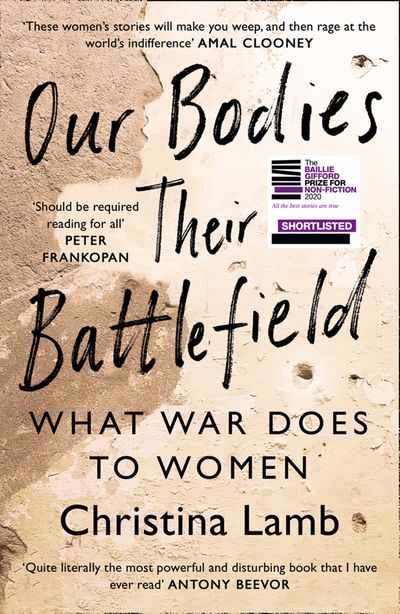 Our Bodies, Their Battlefield: What War Does to Women

SHORTLISTED FOR THE BAILLIE GIFFORD PRIZE FOR NON-FICTION 2020

SHORTLISTED FOR THE ORWELL PRIZE 2021

A Times and Sunday Times Best Book of 2020

Author: Christina Lamb
Format: Paperback
Release Date: 15 Apr 2021
Pages: 448
ISBN: 978-0-00-830004-3
Price: £10.99 (Export Price) , £10.99
Christina Lamb is Chief Foreign Correspondent at The Sunday Times. She has since been awarded Foreign Correspondent of the Year five times as well as Europe’s top war reporting prize, the Prix Bayeux and was recently given the prestigious Lifetime Achievement Award by the Society of Editors. She is the bestselling author of ten books including Farewell Kabul, The Africa House, and The Sewing Circles of Herat and co-wrote the international bestseller I am Malala with Malala Yousafzai and The Girl from Aleppo with Nujeen Mustafa. Her last book Our Bodies, Their Battlefields won the first Pilecki Institute award for war reporting and was shortlisted for Britain\'s top non-fiction award, the Baillie Gifford Prize, as well as the Orwell Prize and the New York Public Library Bernstein award. She is a Fellow of the Royal Geographical Society, an Honorary Fellow of University College Oxford and was made an OBE in 2013.

”'A wake-up call to the magnitude and horrors of rape in war - the world's most neglected war crime. These women’s stories will make you weep, and then rage at the world's indifference.” - Amal Clooney

”'Sharing these stories is necessary and incredibly brave” - Sheryl Sandberg

'Christina Lamb has done the impossible - and written women into history … An extraordinary achievement of in depth journalism, powerful storytelling, grit and heart. A wake up call to the magnitude and horror of rape of women throughout history and the world. If you read one book this year, read this. Astounding.' Eve Ensler, author of The Vagina Monologues -

”'For millennia mass rape has been a weapon of war. But the testimony of abuse is almost entirely absent from all recorded history. At last this brave, beautiful and brutal book allows victims to speak - devastatingly, inspirationally” - Bettany Hughes

”'This is the most powerful and disturbing book I have ever read. It must have taken courage to research and write this book. Christina Lamb has more than accomplished her duty. It is now our duty to face this terrible truth - that of man’s inhumanity to woman.” - Anthony Beevor, Spectator

‘A brave and harrowing book, and were there justice in the world, would be at the top of the bestsellers list for weeks.’Melanie Reid, The Times -

”'A deeply traumatic and important book … Provides a corrective that is by turns horrific and profoundly moving … Lamb is an extraordinary writer. Her compassion for those she talks to and deep understanding of how to tell their stories makes this a book that should be required reading for all - even though (and perhaps because) it is not an enjoyable experience … Powerful” - Peter Frankopan, Guardian