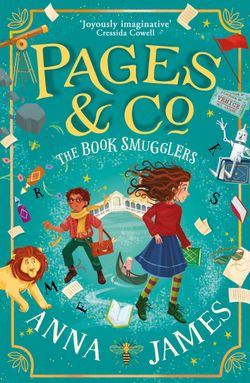 ‘Joyously imaginative’ Cressida Cowell, author of How to Train Your Dragon

Fourth in the modern-classic and bestselling bookwandering series for readers aged eight to twelve that celebrates all that is best in life: books, adventure, friendship – and cake.

Milo lives on board the Sesquipedalian, or “Quip” – a magical train that uses the power of imagination to travel through both Story and the real world. The train is owned by Milo’s uncle, Horatio, and Milo has witnessed many of his uncle’s dodgy dealings as a book smuggler trading in rare books.

When Horatio takes on a dangerous new job, he needs the help of Tilly Pages. And Tilly owes Horatio a favour. But when poisoned copies of The Wizard of Oz are sent to Horatio and Tilly’s grandfather, sending them both into deep sleeps, Milo and Tilly find themselves racing against time to save them – and to figure out what is going on.

Their journey takes them to the Emerald City with Dorothy, rocketing on the unruly Quip, and eventually to Venice in Italy, in pursuit of the mysterious Alchemist. The very essence of imagination, story itself, may be in danger . . .

Anna James is a writer and journalist living in London. Anna was Book News Editor at The Bookseller magazine and was Literary Editor of Elle UK. Anna has also written for The Pool, The LA Times, The Financial Times and The Independent, as well as making bookish YouTube videos as A Case For Books. She hosts literary events and panels and is the co-founder and host of the YA Salon in London. She was shortlisted for the Kim Scott Walwyn Award for Women in Publishing in 2015, and the London Book Fair Trailblazers Award in 2016.