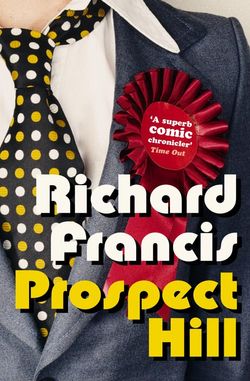 Fans of Jonathan Coe will love this extraordinary panoramic novel, which turns upon the whirligig of life that is Costford, a North Western town, in 1970.

Costford, a brash north of England town. It’s 1970 and young Trevor Morgan has a magical smile and large ambitions. But his marriage is in crisis, and he seeks help from an unexpected quarter: feisty middle-aged May Rollins. May is feeling the stress of living with the demented mother she has always hated. Strange things start happening: she spots a lollipop lady at eight o’clock on an August evening; her TV converts to colour of its own accord; and mother takes to wandering off, with murderous intent, when the minder, May’s stepdaughter Cherry, is not looking.

May and Trevor are political enemies, at odds over a controversial plan to build council flats at Prospect Hill, but their relationship takes a shocking – and ambiguous – twist. Meanwhile Art Whiteside, a predatory estate agent who believes in true love, complicates affairs on both town and home fronts.

With dazzling ingenuity, Richard Francis catches the whirligig of urban life at the very moment when contemporary society was struggling into being. His comic and poignant novel conjures up the fumbled negotiations we make between our public and private lives, evoking the pain and pleasure of husbands, wives, and lovers, of parents and children – and depicting a personal and communal quest for the meaning of home.

Richard Francis is a novelist, broadcaster and academic, who taught American Literature for a number of years at Manchester University where he is currently a visiting professor. He is the author of ‘Transcendental Utopias’, a study of American communities, and his two most recent novels are ‘Judge Sewell’s Apology’ and ‘Prospect Hill’. He teaches on the MA in Creative Writing at Bath Spa University College.