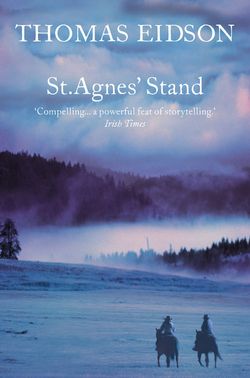 Set in New Mexico, St Agnes’ Stand is a classic story of the American West.

Nat Swanson is on the run from a mob of Texas cowboys. He has killed a man in a fair fight, but the man’s friends believe he was shot in the back and set out to string Swanson up for murder. A bullet in his leg slows him down and with the posse closing in, his chances of survival look dim. Trying desperately to get to sanctuary in California, he comes upon two freight wagons besieged by Apaches, and, against his better judgment, stops to help. He kills one of the Indians with his grandfather’s antique crossbow, buying time for whoever survives behind the wagons. Thinking he’s done his good deed, he continues his flight. One of those trapped, however, is 76-year-old Sister Agnes, who prays to God for a man to deliver her, her fellow nuns and the seven orphans they are transporting.

Sister Agnes is convinced that Nat Swanson has been sent by God to rescue them. Swanson is equally convinced that the best they can hope for is not to be taken alive. And for five gruesome days in the blazing heat and dust, faith fights with humanity for the simple right to exist.

Thomas Eidson is Executive Vice President of a large communications firm in Boston. His grandparents lived in Oklahoma Territory, Kansas and Southern Colorado, and it was out of oral family histories and storytelling that his books grew. He is the author of four previous novels including the award-winning St Agnes' Stand. In 2004, Ron Howard made his novel The Last Ride into a feature film, The Missing. Thomas Eidson lives in Boston, Massachusetts.