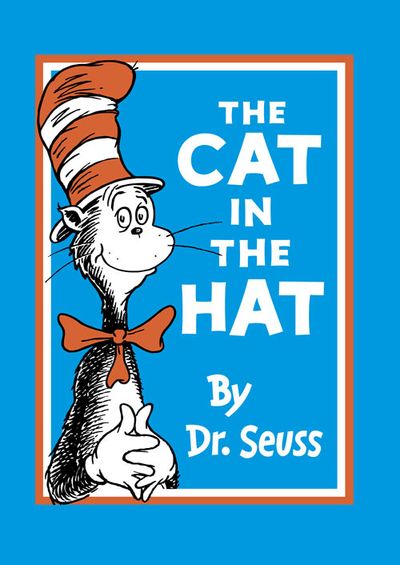 The Cat in the Hat

This beautiful hardback collectors edition will make the perfect gift for Dr Seuss fans! When the Cat in the Hat steps in on the mat, Sally and her brother are in for a roller-coaster ride of havoc and mayhem!

With his unique combination of hilarious stories, zany pictures and riotous rhymes, Dr. Seuss has been delighting young children and helping them learn to read for over fifty years. Creator of the wonderfully anarchic Cat in the Hat, and ranked among the UK’s top ten favourite children’s authors, Seuss is firmly established as a global best-seller!

Author: Dr. Seuss
Format: Hardback
Ageband: 3 to 7
Release Date: 03 Sep 2009
Pages: 64
ISBN: 978-0-00-732453-8
Price: £12.99 (Export Price) , £7.99
Theodor Seuss Geisel – better known to his millions of fans as Dr. Seuss – was born the son of a park superintendent in Springfield, Massachusetts, in 1904. After studying at Dartmouth College, New Hampshire, and later at Oxford University in England, he became a magazine humorist and cartoonist, and an advertising man. He soon turned his many talents to writing children’s books, which included the creation of the one and only ‘The Cat in the Hat’, published in 1957, which went on to become the first of a successful range of early learning books known as Beginner Books.

”'[Dr. Seuss] has…instilled a lifelong love of books, learning and reading [in children]” - The Telegraph

”'Dr. Seuss ignites a child’s imagination with his mischievous characters and zany verses” - The Express

”'The magic of Dr. Seuss, with his hilarious rhymes, belongs on the family bookshelf” - Sunday Times Magazine

”'The author… has filled many a childhood with unforgettable characters, stunning illustrations, and of course, glorious rhyme” - The Guardian