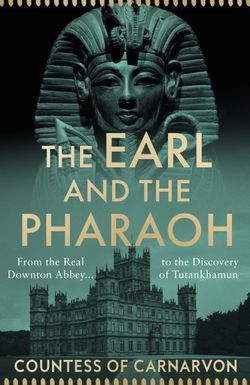 One hundred years ago Tutankhamun’s tomb was discovered by Lord Carnarvon and Howard Carter. Discover their world of ancient secrets and priceless treasure in this revelatory new biography.

Between November 1922 and spring 1923, a door to the ancient Egyptian world was opened. The discovery of the tomb of Tutankhamun would be the most astonishing archaeological find of the century, revealing not only the boy pharaoh’s preserved remains, but thousands of finely crafted objects, from the iconic gold mask and coffins to a dagger made from meteorite, chalices, beautiful furniture and even 3000-year-old food and wine. The world’s understanding of Ancient Egyptian civilisation was immeasurably enhanced, and the quantity and richness of the objects in the tomb is still being studied today. Two men were ultimately responsible for the discovery: Lord Carnarvon and Howard Carter. It was Lord Carnarvon who held the concession to excavate and whose passion and ability to finance the project allowed the eventual discovery to take place.

The Earl and the Pharaoh tells the story of the 5th Earl of Carnarvon. Carnarvon’s life, money and sudden death became front-page news throughout the world following the discovery of the tomb, fuelling rumours that persist today of ‘the curse of the pharaohs’. His beloved home, Highclere Castle, is today best-known as the set of Downton Abbey.

Drawing on Highclere Castle’s never-before-plumbed archives, bestselling author Fiona, the Countess of Carnarvon, charts the twists of luck and tragedies that shaped Carnarvon’s life; his restless and enquiring mind that drove him to travel to escape conventional society life in Edwardian Britain.

The Countess of Carnarvon lives at Highclere Castle, best-known to millions worldwide as the setting for the popular television programme Downton Abbey. As an author, Lady Carnarvon has written several bestselling books including Lady Almina and the Real Downton Abbey, Lady Catherine, and At Home at Highclere.