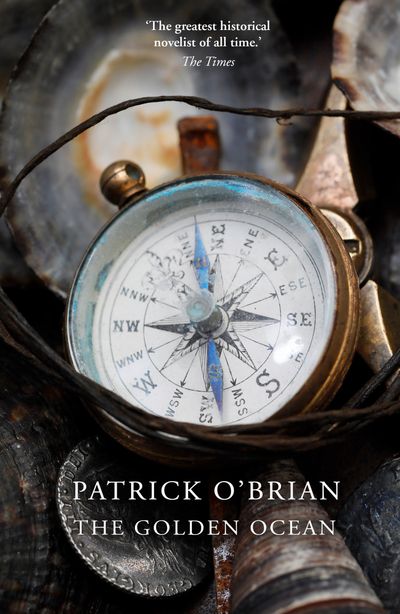 The first novel Patrick O’Brian ever wrote about the sea – and the precursor to the famous Aubrey-Maturin series.

The Golden Ocean is the first novel Patrick O’Brian ever wrote about the sea. The novel shares the same sense of excitement and the rich humour of the Aubrey-Maturin novels, invoking the eloquent style and attention to historical detail that O’Brian readers admire so much.

The protagonist of this story is Peter Palafox, son of a poor Irish parson, who signs on as a midshipman, never before having seen a ship. He is a fellow who would have delighted the young Stephen Maturin or Jack Aubrey … and quarrelled with them as well. Together with his life-long friend Sean, Peter sets out to seek his fortune, embarking on a journey of danger, disappointment, foreign lands and excitement.

Written in 1956, this is a tale certain to please not only the many admirers of O’Brian, but any reader with an adventurous soul.

Author: Patrick O’Brian
Format: Paperback
Release Date: 05 Jan 2023
Pages: 336
ISBN: 978-0-00-733388-2
Price: £9.99 (Export Price) , £9.99
Patrick O’Brian, until his death in 2000, was one of our greatest contemporary novelists. He is the author of the acclaimed Aubrey–Maturin tales and the biographer of Joseph Banks and Picasso. He is the author of many other books including Testimonies, and his Collected Short Stories. In 1995 he was the first recipient of the Heywood Hill Prize for a lifetime’s contribution to literature. In the same year he was awarded the CBE. In 1997 he received an honorary doctorate of letters from Trinity College, Dublin. He lived for many years in South West France and he died in Dublin in January 2000.

‘If O’Brian’s novels have become a cult, this is because they are truly addictive. . . They are, quite magnificently, adventure yarns whose superb authenticity never distracts from the sheer thrill of the action.’Caroline Moore, Sunday Telegraph -

‘My hero is Patrick O’Brian. It’s basically impossible to write that well.’David Mamet -

‘One of the most compelling and brilliant novelists of his time . . . Beyond his superbly elegant writing, wit and originality, Patrick O’Brian showed an understanding of the nature of a floating world at the mercy of the wind and the sea which has never been surpassed.’Max Hastings, Evening Standard -

‘Written with most engaging enthusiasm that can’t fail to give pleasure to anybody who enjoys historical adventure flavoured with more than a dash of realism.’The Sunday Times -

‘Patrick O’Brian brings depth to his sea-stories with outstanding dialogue, characterisation, humour and a golden thread of romance. You don’t have to love books about naval battles to become entranced.’Katie Fforde -

‘The story has in it something like greatness. It is naive, matter-of-fact; tragic, richly funny; closely detailed but with a bold sweeping action. It goes on that very small shelf reserved for authors who, disregarding aptitudes spin a story out of the heart and soul of their experience and the joy of living.’TLS -

'As always, the author's erudition and humour are on display…the attention to period speech and detail is uncompromising and while the cascades of natural love can be dizzying, both aficionados and newcomers will be swept up by the richness of Mr O'Brian's prodigious imagination.'Scott Veale, New York Times -