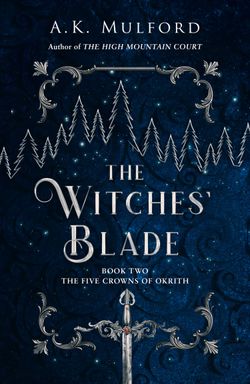 The addictive second novel in the Five Crowns of Okrith series brings us into a new part of the world as the fae princess Rua joins forces with a truly unlikely ally – all with romance and adventure readers have come to expect from the viral sensation!!

A magic sword. A powerful curse. An untested fae princess.

And a continent on fire…

Eighteen-year-old Ruadora Dammacus now possesses the Immortal Blade, a powerful artefact that might be enough to overthrow the cruel oppression threatening the land. Yet when Rua discovers the Northern Court King’s uncle is not only alive but has cast a curse on the blue witch army, she realises that the battle has only just begun.

Venturing into the enemy’s court, Rua finds herself working closely with the young king. Her problems are mounting, and the handsome – and perhaps evil – royal is only one of them. With the eyes of her new-found family on her, Rua must prove herself worthy of the Immortal Blade if she is to break the spell over the blue witches.

But the greatest challenge she will face is her growing connection to the Northern King and what it could mean for her people…and her heart.

A.K. Mulford is a bestselling fantasy author and former wildlife biologist who swapped rehabilitating monkeys for writing novels.She/they are inspired to create diverse stories that transport readers to new realms, making them fall in love with fantasy for the first time, or all over again.She now lives in New Zealand with her husband and two young human primates, creating loveable fantasy characters and making ridiculous TikToks (@akmulfordauthor).Visit her website at www.akmulford.com