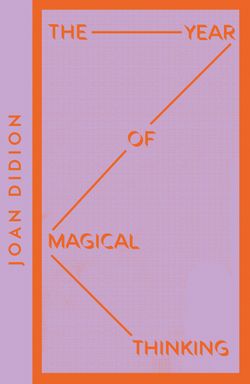 A single person is missing for you, and the whole world is empty

John Gregory Dunne and Joan Didion saw their daughter fall ill. At first they thought it was flu, then she was placed on life support. Days later, the Dunnes were sitting down to dinner when John suffered a massive and fatal coronary.

This powerful book is Didion’s ‘attempt to make sense of the weeks and then months that cut loose any fixed idea I ever had about death, about illness’. The result is a personal yet universal portrait of marriage and life, in good times and bad, from one of the defining voices of American literature.

‘Beautiful and devastating … Didion has always been a precise, humane and meticulously truthful writer, but on the subject of death she becomes essential’ Zadie Smith

Joan Didion is one of America’s most respected writers, her work constituting some of the greatest portraits of modern-day American culture. Over the four decades of her career, she has produced widely-acclaimed journalistic essays, personal essays, novels, non-fiction, memoir and screenplays. Her memoir The Year of Magical Thinking won the National Book Award and the Pulitzer Prize.